And none shone brighter than Jennifer Lopez, who turned up the heat on the red carpet in a tight cream Georges Hobeika gown that showcased her famously toned figure.

The singer/actress/dancer put her curves on full display in the satin number, which featured a sheer fabric on the back; In addition to showcasing her sexy back, Jennifer’s pert derriere and flat midsection were highlighted in the fitted frock.

The mother of two’s gown had silver detailing along edges of the fabric and along her midriff, adding the perfect amount of sparkle to an otherwise neutral look.

Her glittering arrival to the Critics’ Choice Awards comes just one week after she suffered a rare fashion misstep at the Golden Globe Awards; For the Globes, the icon decided on a voluminous Zuhair Murad dress – which also featured a large bow on the front – doing little to showcase her famous form.

Nevertheless, Jennifer came back strong at the Critics’ Choice Awards, showing fans and fashion critics alike why she is indeed a style icon.

Looking great: The mother of two’s gown had silver detailing along edges of the fabric and along her midriff, adding the perfect amount of sparkle to an otherwise neutral look

Anne Hathaway was an absolute vision in a glittering gold Versace dress with a plunging neckline; the beautiful movie star, 37, showcased her amazing post-baby figure in the seventies-style frock just weeks after giving birth to her second child.

The Princess Diaries star’s gown had oversized sleeves, a fitted waist and a slight train; the mother of two highlighted her cleavage in the intricately-designed frock, adding asymmetrical Messika earrings, gold Alexandre Birman heels and a structured clutch by Judith Leiber.

Anne, who arrived with her husband of seven years Adam Shulman, wore her dark brunette locks center parted; she finished off her incredible look with sheer coral lipstick on her pout, peachy blush on her cheeks and kohl lined lids. 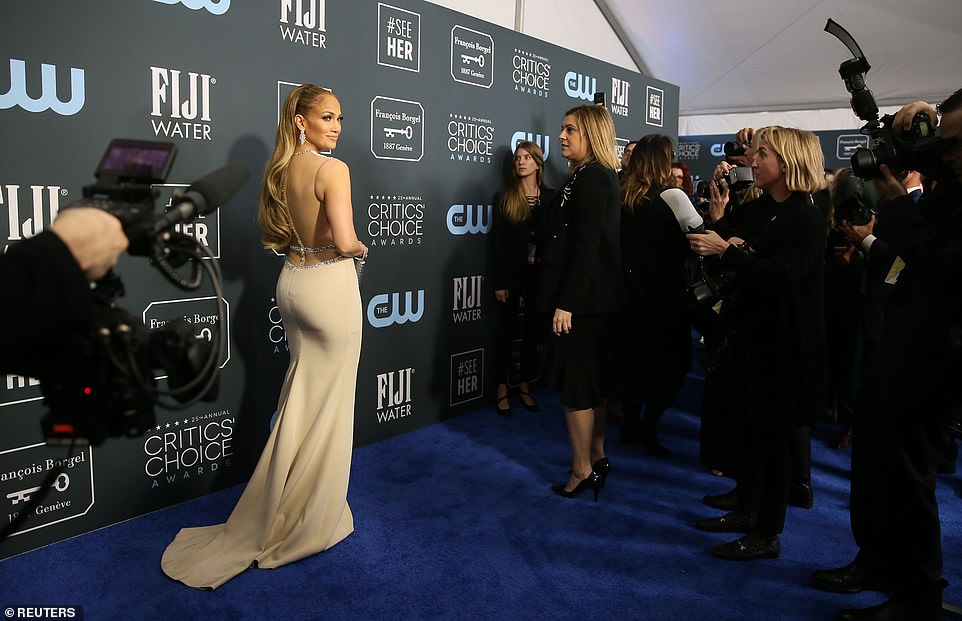 Sheer delight: Jennifer’s long tresses were slicked back on the top before cascading in elegant curls behind her

Diamonds are a girls best friend! Jennifer wore her stunning engagement ring from fiance Alex Rodriguez, as well as a diamond pinky ring, a large diamond bracelet and earrings

Staying close: Anne posed alongside her husband Adam Shulman, 38; the lovebirds have two children: son Jonathan, three, and their newborn, who they welcomed late last year. The newborn’s gender and name have not yet been revealed

In addition to J.Lo and Anne, Zendaya also displayed her inner bombshell as she glided onto the red carpet in a Tom Ford masterpiece.

The 23-year-old actress showed off her flat midriff in the designer fuchsia set, which consisted of a chromed breastplate and a matching jersey skirt from the Spring 2020 line.

Zendaya finished off her futuristic but ever so stylish look with bold magenta eyeshadow, glossy bubble gum pink lipstick and rosy blush.

Bombshell star Charlize Theron looked every bit the movie star that she is in a plunging striped silver Celine by Heidi Slimane frock.

The 44-year-old award-winning actress cut a glamorous figure gown in the cleavage-baring look, which also showcased her toned legs with a thigh-slit.

Charlize paired the racy look with a classic black blazer, a statement diamond necklace by Messika and strappy heels. 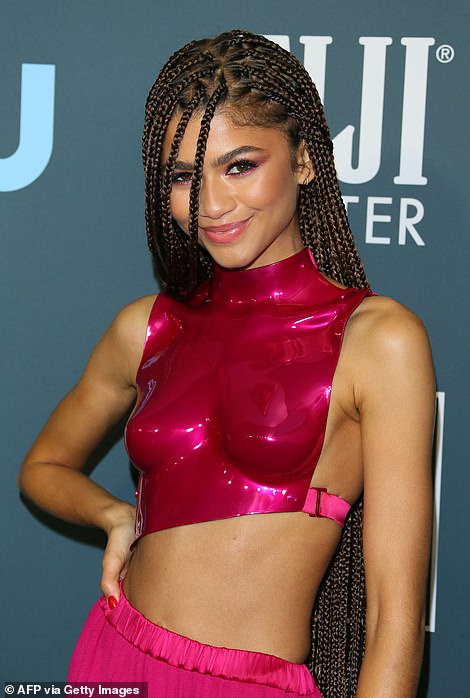 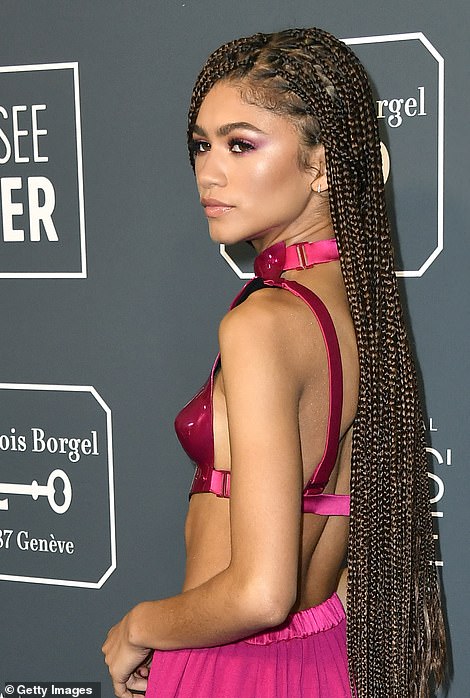 Flawless: The star showcased her flat midsection in the futuristic crop top and high-waisted skirt

The gorgeous Kate Beckinsale continued with the silver hued trend.

The actress shimmered in a silver Julien MacDonald gown that had a sheer train from one shoulder; she added Jimmy Choo heels and jewels by Kallah, Yvan Tufenkjian and Djula.

Joey carried a box of Good & Plenty Licorice candy in her tiny clutch. The candy, which was first made in 1893, is believed to be the oldest branded candy in the US. 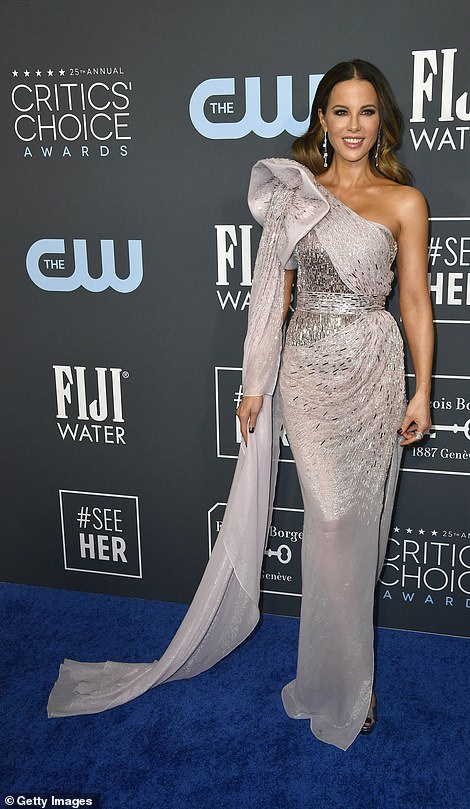 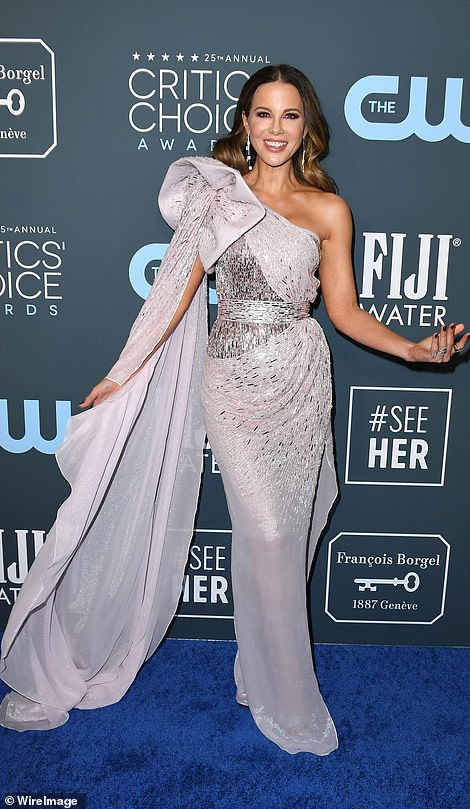 British rose: The gorgeous Kate Beckinsale shimmered in a silver Julien MacDonald gown that had a sheer train from one shoulder; she added Jimmy Choo heels and jewels by Kallah, Yvan Tufenkjian and Djula 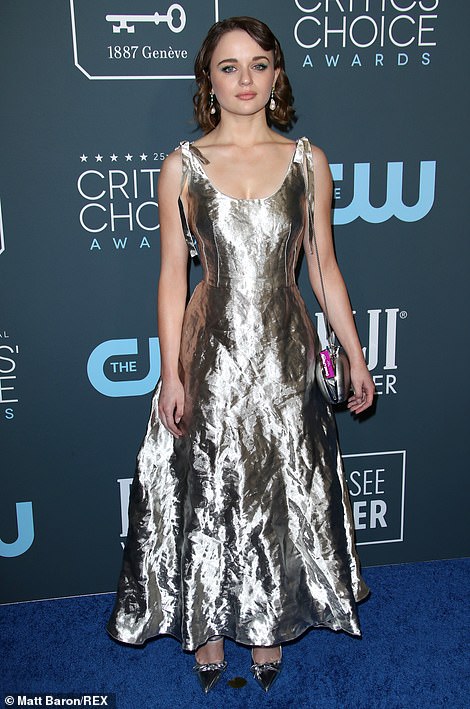 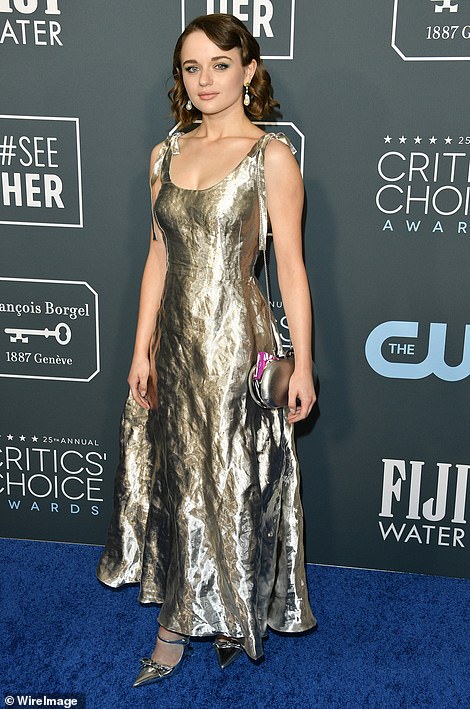 Shining star:  Joey King donned a silver and gold reflective gown by Prada; she carried a box of Good & Plenty Licorice candy in her tiny clutch. The candy, which was first made in 1893, is believed to be the oldest branded candy in the US

Nicole, 52, posed up a storm in her Armani Prive Fall 2019 Haute Couture gown, complete with a strapless neckline and textured skirt.

Christina kept it sleek in a long-sleeved gown, as did Renee in her Dior Haute Couture strapless gown.

Mandy, 35, opted for a different approach to this year’s red carpet, opting for a cropped Elie Saab Resort 2020 jumpsuit with a capelet instead of a dress.

The bold move proved to be rewarding, as the star turned heads in her chic strapless one-piece; the jumpsuit had two chainlinks across the torso for a pop of shine.

Wow factor: The This Is Us actress flashed a hint of cleavage in the strapless jumpsuit with a capelet; she is wearing Elie Saab Resort 2020

Once Upon a Time… in Hollywood – WINNER

Once Upon a Time… in Hollywood

Quentin Tarantino – Once Upon a Time… in Hollywood – WINNER

Robert Richardson – Once Upon a Time… in Hollywood

Fred Raskin – Once Upon a Time… in Hollywood

Dolemite Is My Name

Once Upon a Time… in Hollywood

How to Train Your Dragon: The Hidden World

I Lost My Body

Dolemite Is My Name – WINNER

Portrait of a Lady on Fire

Best Actor in a Drama Series

Asante Blackk – This Is Us (NBC)

Justin Hartley – This Is Us (NBC)

One Day at a Time (Netflix)

Best Actress in a Comedy Series

Christina Applegate – Dead to Me (Netflix)

Kirsten Dunst – On Becoming a God in Central Florida (Showtime)

Rita Moreno – One Day at a Time (Netflix)

Best Movie Made for Television

Best Actress in a Limited Series or Movie Made for Television

Asante Blackk – When They See Us (Netflix)

John Leguizamo – When They See Us (Netflix)

She-Ra and the Princesses of Power (Netflix)

Live in Front of a Studio Audience: Norman Lear’s All in the Family and The Jeffersons (ABC) – WINNER

Leonardo DiCaprio – Once Upon a Time… in Hollywood

Eddie Murphy – Dolemite Is My Name

Tom Hanks – A Beautiful Day in the Neighborhood

Brad Pitt – Once Upon a Time… in Hollywood – WINNER

Julia Butters – Once Upon a Time… in Hollywood

Quentin Tarantino – Once Upon a Time… in Hollywood

Barbara Ling, Nancy Haigh – Once Upon a Time… in Hollywood – WINNER

Arianne Phillips – Once Upon a Time… in Hollywood

“I’m Standing With You” – Breakthrough

“Into the Unknown” – Frozen II

Best Actress in a Drama Series

Susan Kelechi Watson – This Is Us (NBC)

Best Actor in a Comedy Series

Paul Rudd – Living with Yourself (Netflix)

When They See Us (Netflix) – WINNER

Best Actor in a Limited Series or Movie Made for Television

Jharrel Jerome – When They See Us (Netflix) – WINNER

Marsha Stephanie Blake – When They See Us (Netflix)

Niecy Nash – When They See Us (Netflix)

Awkwafina led the way for a handful of stars that opted to stand out in bright hues on the red carpet at the Critics’ Choice Awards.

The Crazy Rich Asians actress, born Nora Lum looked gorgeous in a marigold Elie Saab Resort 2020; the standout number had a high-neck with a keyhole detail, a fitted waist and exaggerated sleeves.

Alison Brie, Rachel Brosnahan and Laura Dern all chose various shades of citrus while Olivia Wilde stood out in a neon orange gown.

Lydia Hearst opted to make a sustainable fashion choice for her red carpet look – wearing a pink and black Glemaud dress. She revealed on Instagram that she got the vintage gown from The Real Real. She said: ‘It cost me $80 and saved the planet 146 gallons of water and offset 26.44 driving miles.’

Joining Lydia on a two-tone hued dress was Beanie Feldstein and Betty Gilpin, who looked particularly exquisite in an ombre frock.

Saoirse Ronan was on-point as usual in her standout cream and red patterned Erdem Spring 2020 dress that featured birds and leaves embroidered all over; she paired the number with Tamara Mellon heels and Niwaka jewelry. 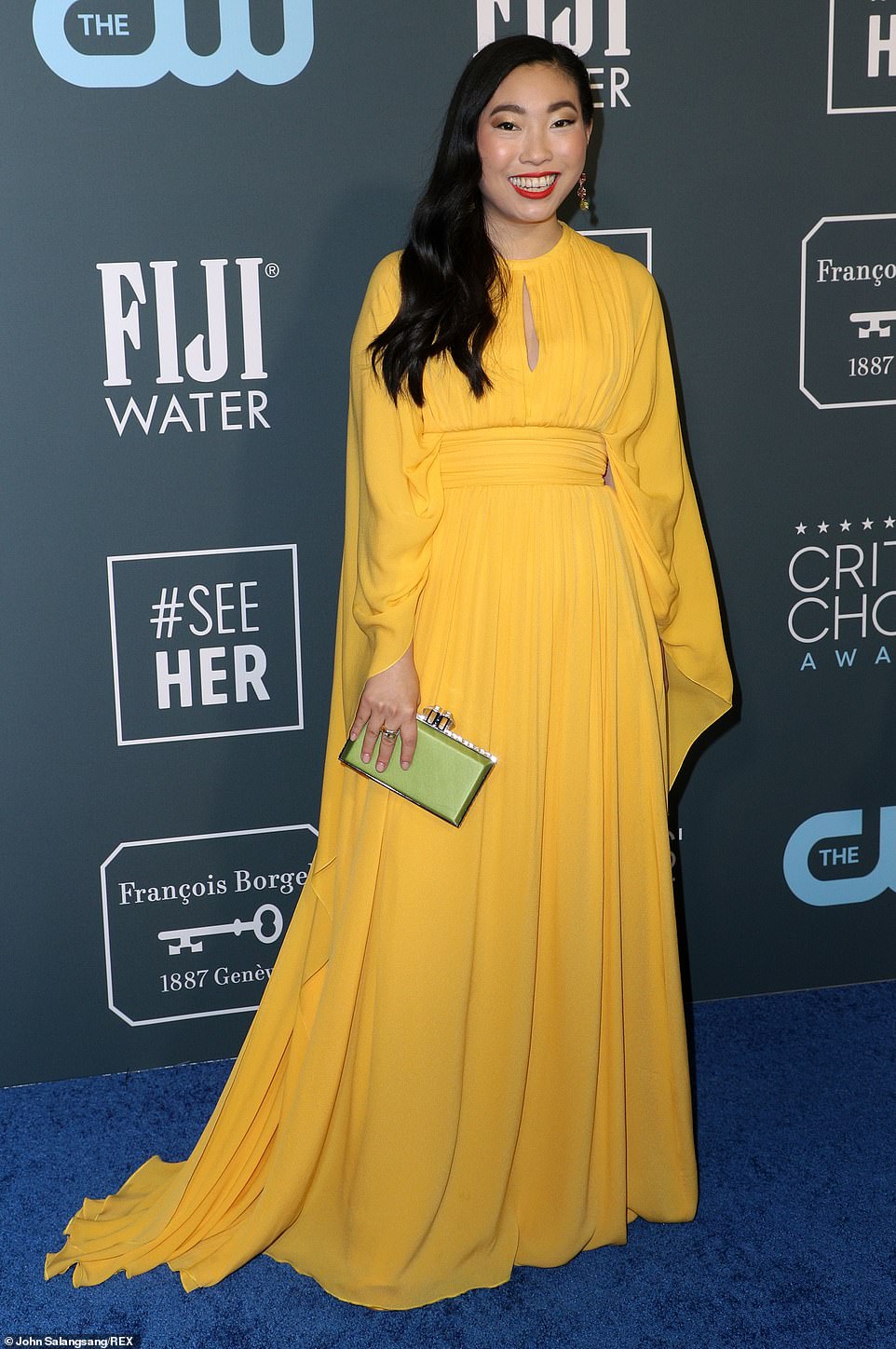 Date night: Olivia Wilde chose a bright orange gown with silver heels as she posed on the carpet with beau Jason Sudeikis; Olivia is wearing a Valentino dress with Jimmy Chool heels, Messika jewels and a Judith Leiber clutch 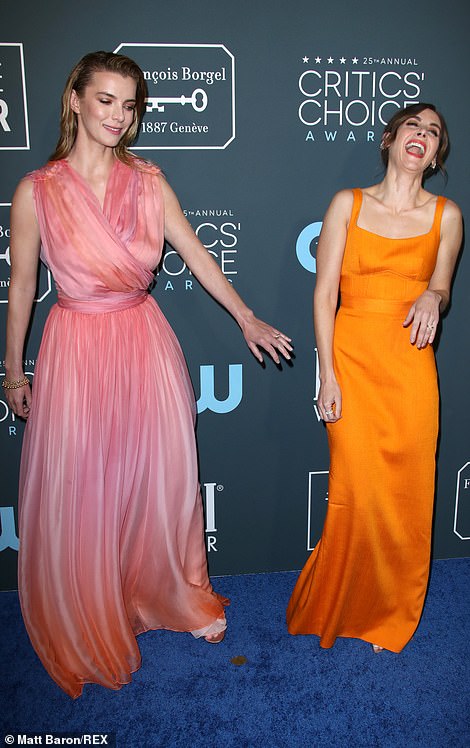 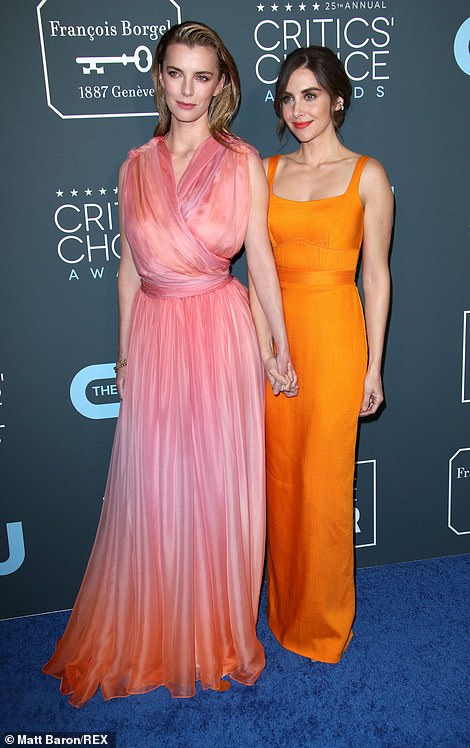 Having a laugh: Glow co-stars Betty and Alison (in Brandon Maxwell) appeared to have a blast on the red carpet in their bright frocks 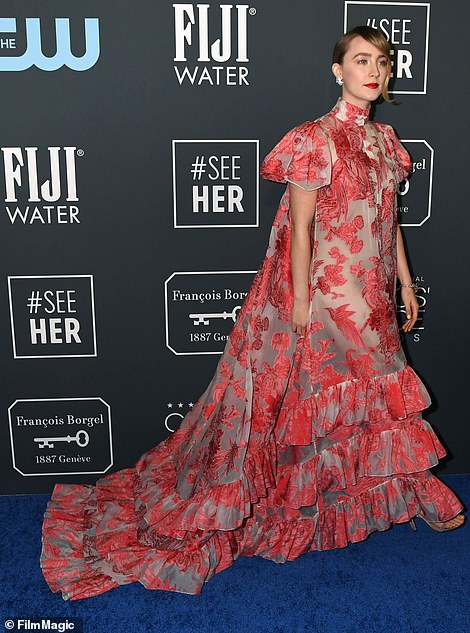 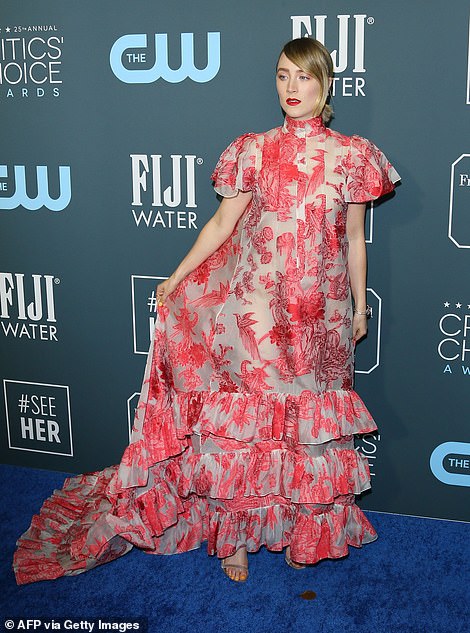 Bright: Saoirse Ronan looked gorgeous in a cream and red patterned dress that featured birds and leaves all over; she paired the number with Tamara Mellon heels and Niwaka jewelry

Pretty in pattern: Alana Arenas and Lauren Ash opted for patterned gowns with red as one of the main hues

Kristen Bell not only went for a bright and shiny hue, she chose a jumpsuit with a cape.

The actress, 39, slipped on a Cong Tri Spring 2020 lime hued one-piece; she posed up a storm in the standout look, which she paired with a silver clutch and drop earrings. 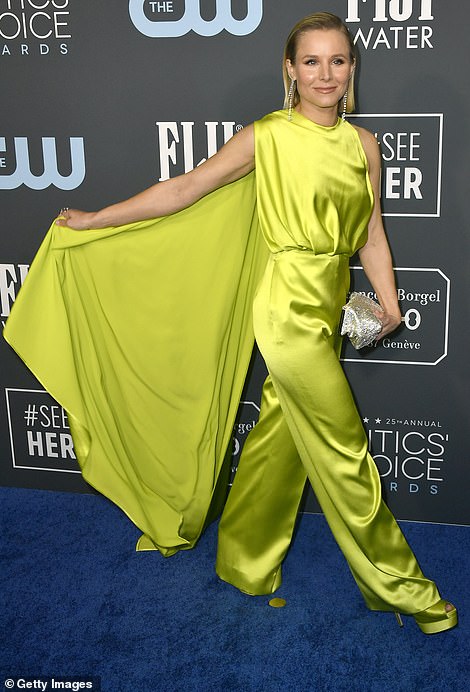 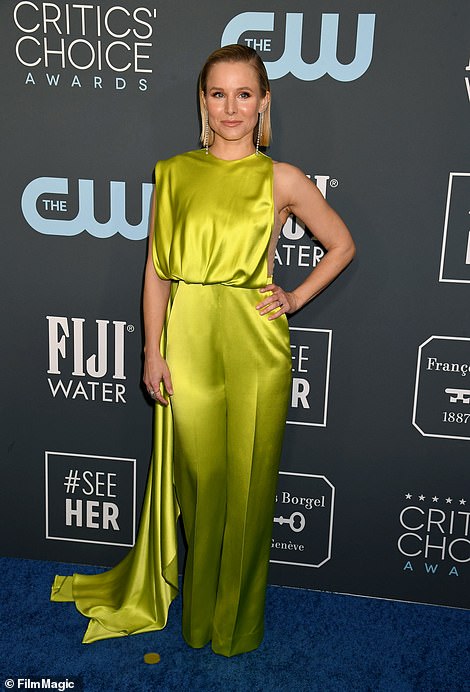 An elegant look: Kristen Bell not only went for a bright and shiny hue, she chose a jumpsuit with a cape; The actress, 39, slipped on a Cong Tri Spring 2020 green one-piece; she posed up a storm in the standout look, which she paired with a silver clutch and drop earrings 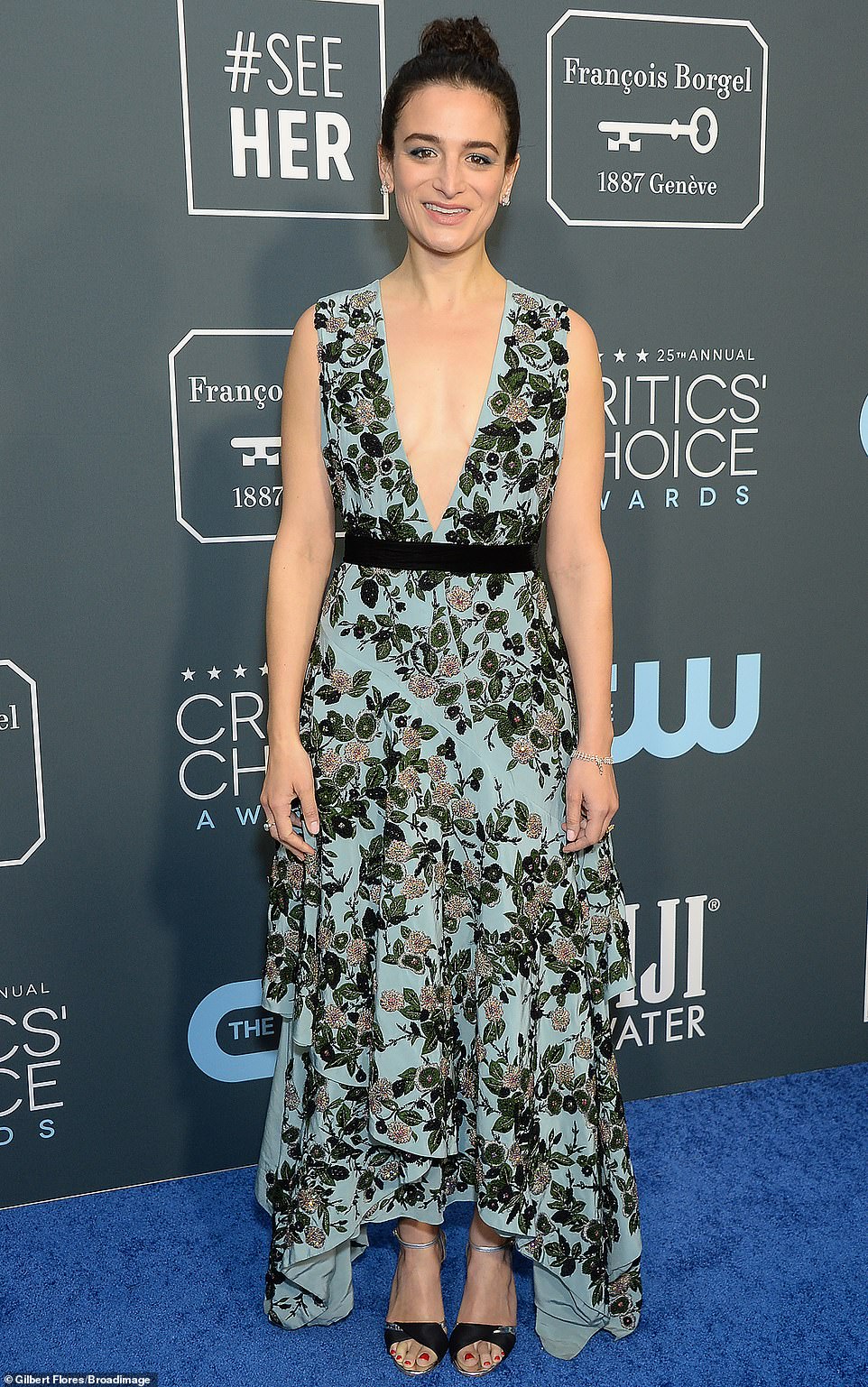 Booksmart star and nominee Kaitlyn completed her look with a stunning half-up ‘do created by celebrity hairstylist Bobby Eliot, who used products from Suave Professionals to get the perfect style.

‘The inspiration for Kaitlyn’s Critics’ Choice Awards look was a Mario Sorrenti photo of Kate Moss for Calvin Klein in the 90’s,’ Bobby revealed.

‘The hair had an effortless, playful feel to it. We decided on the hair to go half up, as to not interfere with the delicate lace on the Dior couture gown.’

In order to achieve that ‘effortless’ glam, Bobby prepped the actress’ hair with the Suave Professionals Lavender & Almond Oil Frizz Calming Shampoo and Conditioner, before applying the Firm Control Boosting Mousse to the roots.

In order to keep Kaitlyn’s locks looking sleek and frizz-free, Bobby then applied the Suave Professionals Sleek Anti-Frizz Cream to the ends of the hair, and then used the brand’s Flexible Control Finishing Hairspray to ‘prep the hair for heat styling’.

To create some texture and movement in the hair, he used the Marcel Curling Iron, and then added the Suave Professionals Refresh & Revive Dry Shampoo to the roots. After pulling half of the hair up and into a chic knot, Bobby finished off with the Suave Professionals Sleek Anti- Frizz Cream, and the Flexible Control Finishing Hairspray for maximum hold. 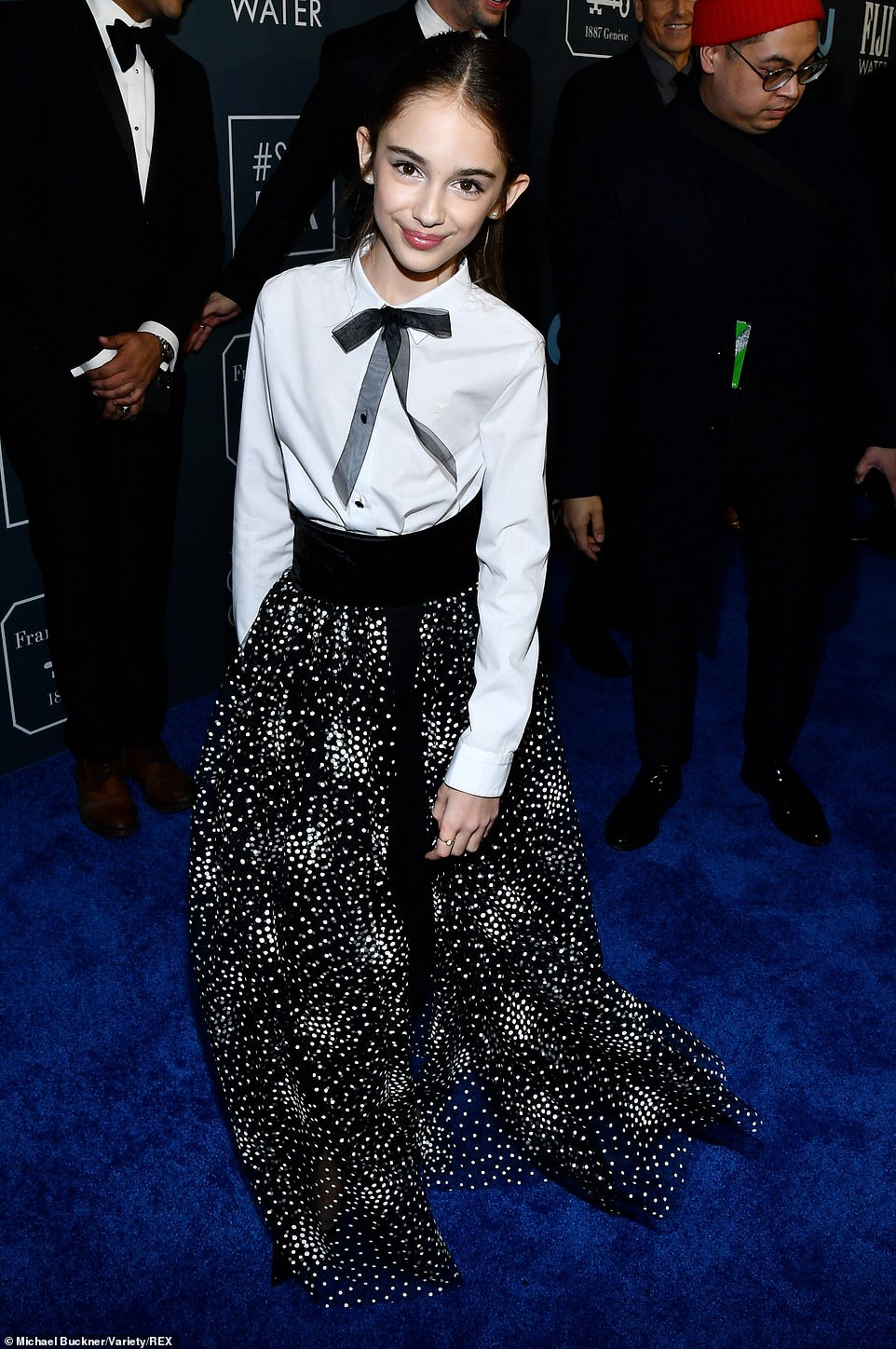 So adorable: Julia Butters, 10, paired a patterned skirt with a collared shirt; she starred in Once Upon A Time In Hollywood

Family first: Joaquin Phoenix, 45, posed with sister Rain Phoenix, 47, on the red carpet;  Justin Hartley arrived with his daughter Isabella, 15, at the Sunday awards ceremony. Justin, who stars on This Is Us, filed for divorce from wife Chrishell Stause in November after two years of marriage 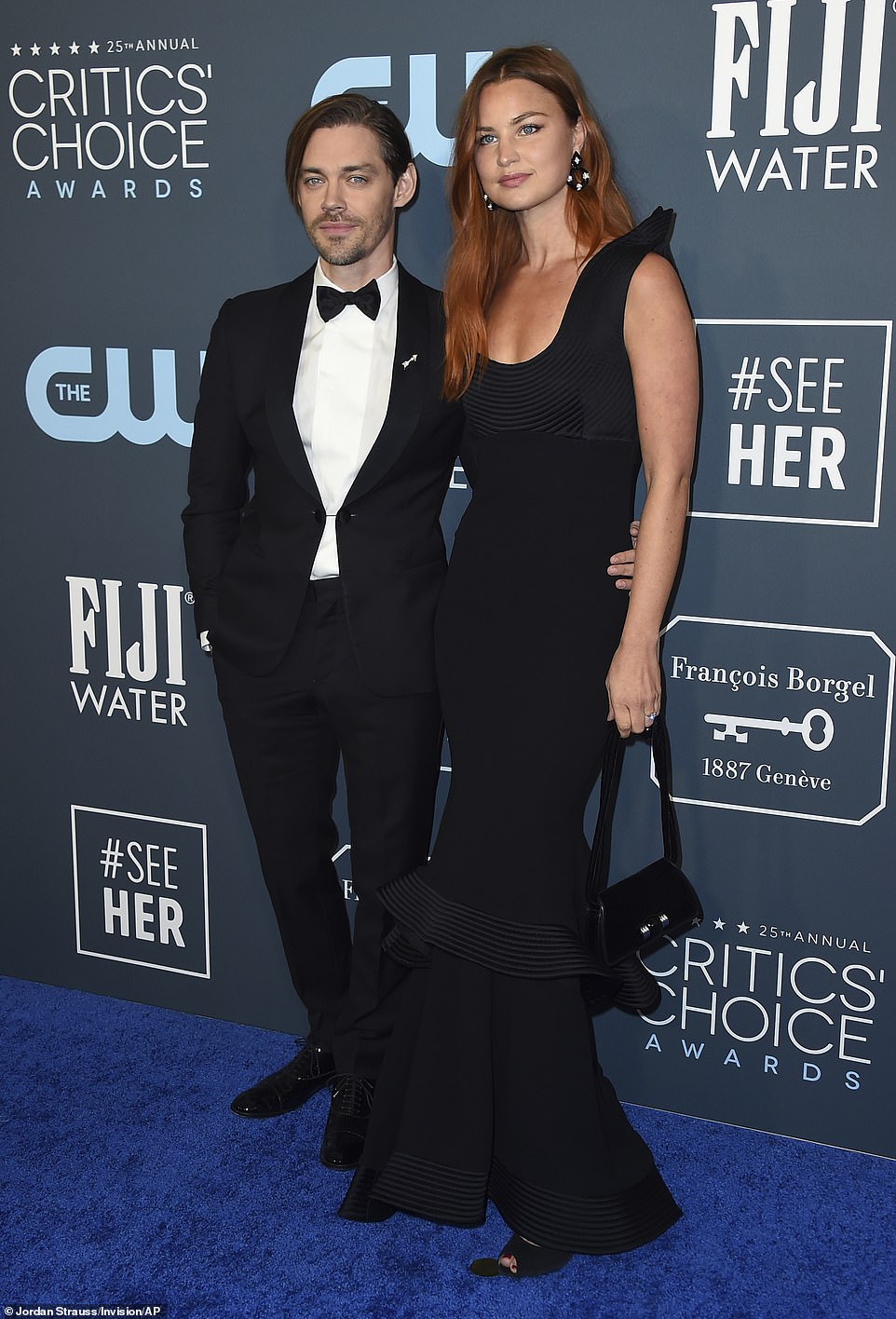 Gorgeous: Tom Payne and Jennifer Akerman posed up a storm on the red carpet 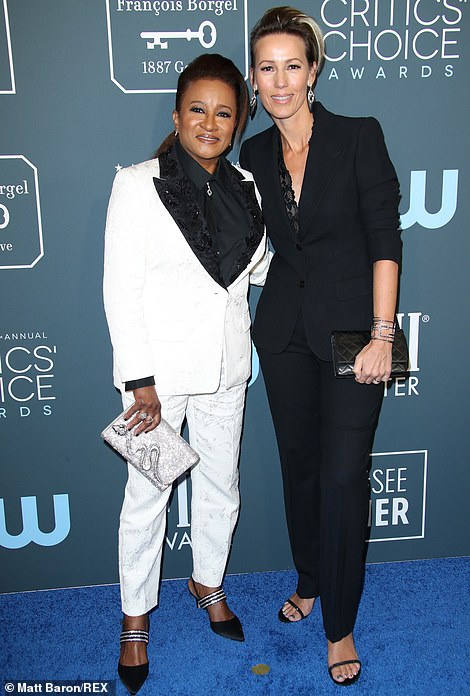 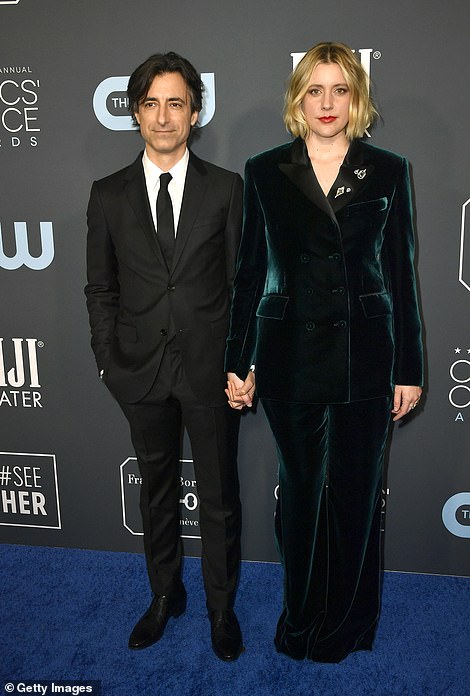 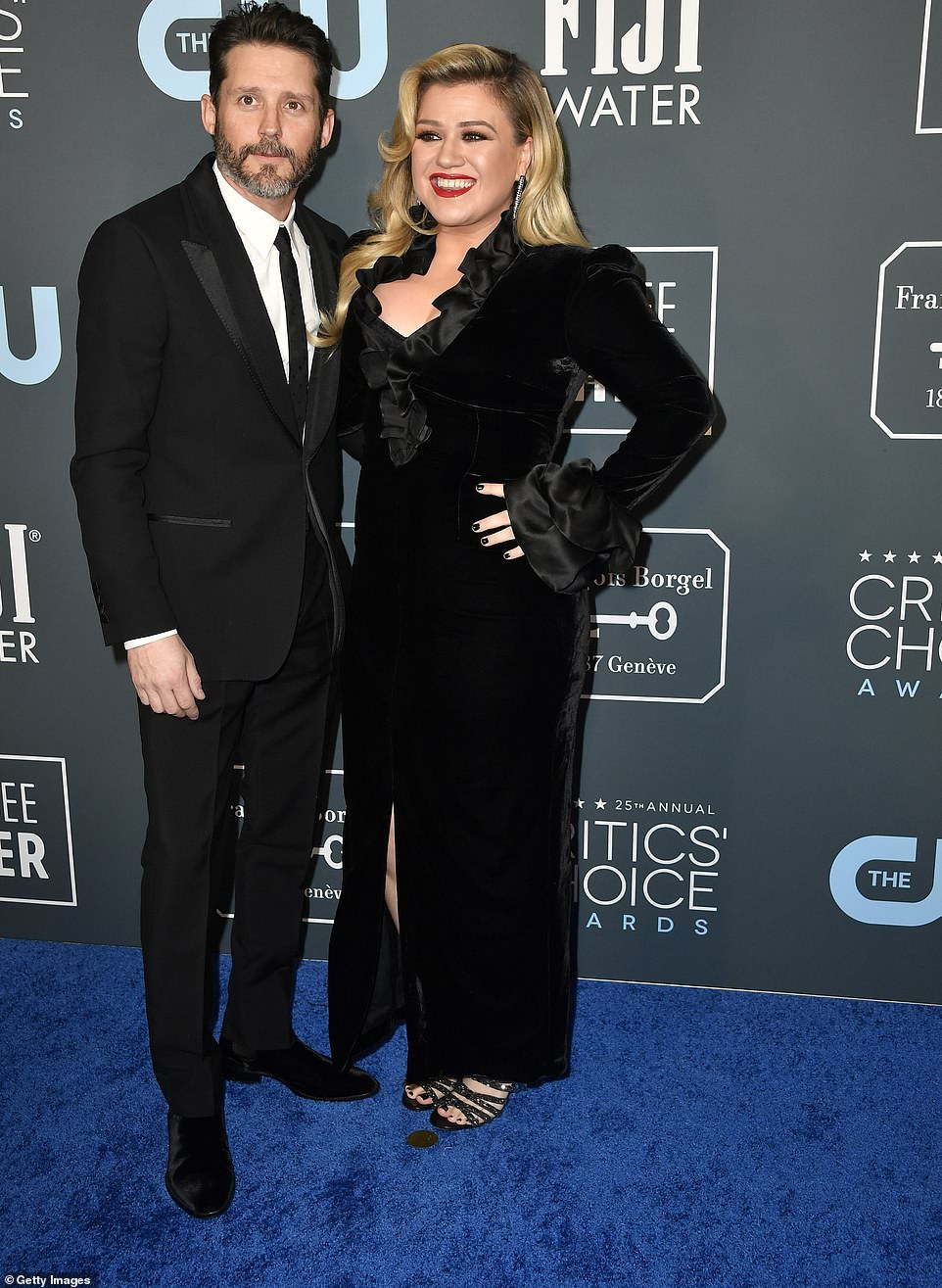 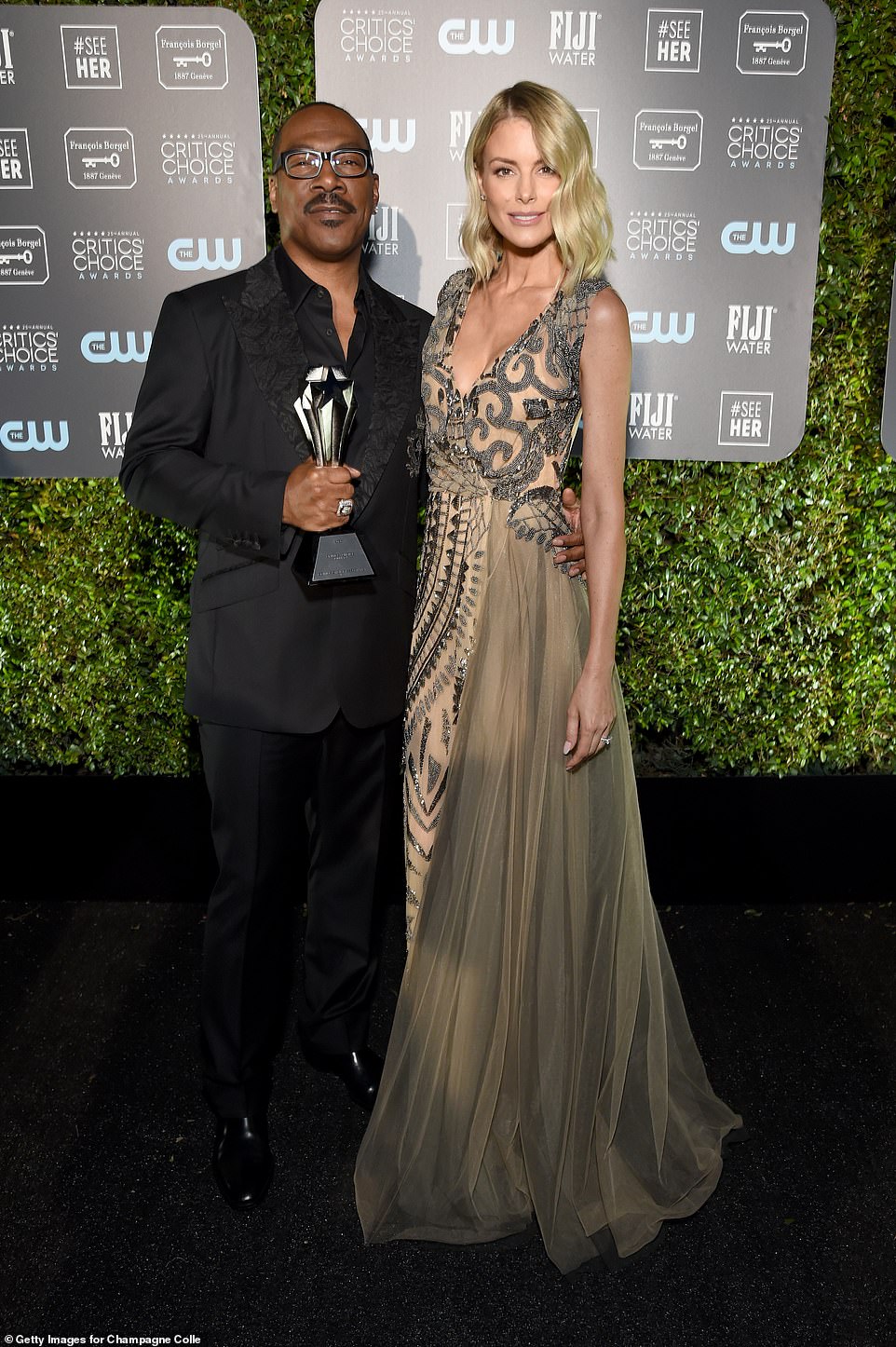 So happy: Chris Hardwick and Lydia Hearst struck a pose together before sharing a kiss

While Brad Pitt won Best Supporting Actors honors again, the movie star was a no-show at the awards ceremony.

Eddie Murphy was given the Lifetime Achievement Award while Kristen Bell earned the evening’s fourth ever #SeeHer honor.

Once Upon a Time got the award for Best Picture and Best Director was a tie between Sam Mendes (1917) and Bong Joon Ho (Parasite).